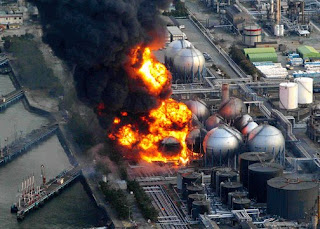 Submitted by local San Antonio Magician Dave King:
I thought some of you would appreciate this e-mail from my brother. He once gave me a tour (in the wee hours of the morning) of the nuclear power plant where he worked for many years.

As a former nuclear power plant operator, I have to say, the disaster in Japan is likely worse than anything I ever imagined. The problem was, most every plant built depends on the assumption that a minimal supply of electrical power can be had within a short time of a major accident. The plant where I worked was hit by a tornado when I worked there, and we lost "off-site power" due to downed high-voltage power lines ("the grid") for about two and a half days. However, we had two "emergency diesel generators" which supplied the power we needed to power emergency equipment during the time we had no off-site power available. I manned one of them for two 12-hour shifts following the tornado, and they worked fine, in spite of the fact that the room temperature of the room where the EDG I was responsible for stayed at 126 degrees for most of the time. When the reactor "trips", and there is a loss of off-site power, there is battery power for the few seconds it takes the EDGs to start and come up to speed and begin to supply emergency power. One EDG is enough to run all the needed emergency equipment, and we had two in service. During the time I worked there, they installed a third EDG, just incase the two EDGs failed to work.

These EDGs have engines that are basically the same as a diesel engine in a locomotive engine. The theory is that so long as you can get more fuel in to run the EDGs, you can stay in that condition for a very long time if needed.

There are more details, but EVERY plan assumes you can get some emergency electrical power back within a reasonable amount of time, and you use it to run your most vital safety equipment, mostly pumps, valves, and indicators.

The problem with this event in Japan was, after the initial accident that was triggered by the earthquake, the safety systems likely would have performed just fine...except the earthquake was followed immediately by the tsumami...a massive wave or waves of water that would have disabled everything electrical, and flooded the EDGs, making them useless. All the seawater would have shorted out most everything electrical.

As if the fuel in the reactors wasn't bad enough, at least that fuel has a reactor vessel around it, and a containment vessel (a large stainless steel "tank") that the entire reactor vessel is located within, with plenty of empty space to hold steam and pressure. But, with no electrical pumps available to remove the heat produced in the fuel, eventually the heat wins. Any water left boils away, exposing fuel rods. Exposed fuel rods start to melt, and a reaction between the atmosphere and some of the metal in the rods produces hydrogen gas, which is explosive. The generators in a power plant are also full of hydrogen, and the hydrogen in them can also explode if mixed with air. These hydrogen explosions, both in the reactor building due to the hydrogen produced as the fuel rods start to melt, and in the generator buildings, can produce fires as well as the violent explosions. As if all this wasn't enough, it sounds as if the "spent fuel pools" were breached from the earthquake, or perhaps the water just boiled away because cooling was lost to the pools, but uncovered fuel will eventually melt. So, you have melting fuel both in the reactor cores, hopefully still inside a reactor "containment building", and melting fuel in "spent fuel pools", basically like swimming pools full of used fuel rods from past running cycles. These pools don't produce a lot of heat normally, but with NO cooling, they will eventually get hot enough to boil the water away, causing the spent fuel to melt, just like the fuel in the reactors. This might even be worse than the melting in the reactors, because at least the fuel in the reactors have more barriers between them and the environment.

The situation tonight is grave. Evidently, the control rooms have been abandoned, meaning they have pretty much given up hope, since they have no electrical power, and no way to run any emergency pumps to keep the fuel covered with water. On TV, they show helecopters dumping water from the air on the reactor buildings. Not sure why they are wasting their time doing such a useless thing...there's no way that will make any difference at all, and the people in the helecopters are getting irradiated for no good reason, and the helecopters will just stir up particulate radiation.

The guys going in the plants now, with seemingly no good plan or equipment, are most likely just giving their lives in vain. Once again, a major waste of human life.

If this event is no worse than Chernobyle, they will be very lucky in my opinion. I think it may be far worse. They need our prayers.
Posted by South Texas Media Access No comments: